Resveratrol (RSV) is a potent lipophilic antioxidant with a low aqueous solubility. Novel nanoformulations have been successfully developed and evaluated to increase the potential of resveratrol as a skin targeting antioxidant. Nanoformulations were prepared using a spontaneous emulsification method, and characterized and evaluated for their capabilities to penetrate/permeate the skin. In nanoformulations, the thermodynamic activity of the RSV penetration into/permeation through the skin was correlated with the thermodynamic activity of the RSV in the formulations.

Hot-melt extruded lipidic pellets for pediatric applications: An investigation of the effects and stability on drug dissolution

When terpenes were incorporated into the nanoformulations, the permeation of RSV through the skin increased and correlated with an increasing lipophilicity of the terpene. The nanoemulsion containing eugenol showed the highest RSV penetration into the stratum corneum (SC) and the epidermis‐dermis‐follicle region, whereas the limonene containing nanoemulsion had the highest RSV permeation through the skin (the enhancement ratios, compared to a saturated solution of RSV, were (i) 9.55 and (ii) 12.61, respectively, based on the average RSV amount (i) in each skin region and (ii) permeation through skin). Click on the image to download the full article as a pdf 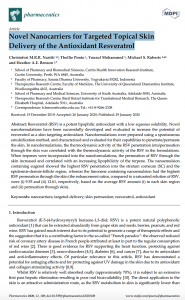 Development and structural characterization of a novel nanoemulsion for oral drug…

Antisolvent precipitation of lipid nanoparticles in microfluidic systems – A…

Hot-melt extruded lipidic pellets for pediatric applications: An investigation of the…

Influence of guest and host particle sizes on dry coating effectiveness: When not to use high mixing intensity

Prev Next 1 of 1,182
Top Pharma-Excipient Links