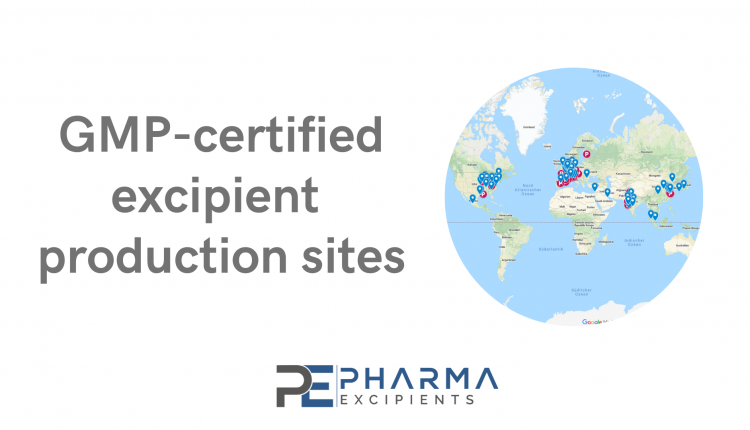 In the pharmaceutical world, the term GMP, or Good Manufacturing Practice, plays quite a big role. In this article, we explain what GMP stands for in general, and specifically for the pharmaceutical excipient industry. Moreover, it is shown which organizations perform testing and inspection, and how the GMP-certification process works. To get a good overview of the currently GMP-certified excipient production sites, we have marked all of them in an interactive map with additional information available.

What is GMP exactly?

“Good manufacturing practices (GMP) are the practices required in order to conform to the guidelines recommended by agencies that control the authorization and licensing of the manufacture and sale of food and beverages, cosmetics, pharmaceutical products, dietary supplements, and medical devices. These guidelines provide minimum requirements that a manufacturer must meet to assure that their products are consistently high in quality, from batch to batch, for their intended use. […] The World Health Organization (WHO) version of GMP is used by pharmaceutical regulators and the pharmaceutical industry in over 100 countries worldwide, primarily in the developing world. The European Union’s GMP (EU-GMP) enforces similar requirements to WHO GMP, as does the FDA’s version in the US. Similar GMPs are used in other countries, with Australia, Canada, Japan, Saudi Arabia, Singapore, Philippines, Vietnam and others having highly developed/sophisticated GMP requirements.” (Wikipedia)

In the excipient industry, EXCiPACT has an important role:

Regulators require excipient users to qualify their suppliers based on GMP/GDP audits and they have indicated that third party auditing of suppliers is acceptable if a creditable certification body issues certificates and audit reports by employing qualified auditors who are demonstrably credible in suitable GMP/GDP standards and in the needs of the pharmaceutical industry. EXCiPACT asbl is a non-profit organisation that owns and manages oversight of such an independent, high quality, third party Certification Scheme available to pharmaceutical excipient manufacturers and distributors worldwide.

Which certification bodies are working with EXCiPACT?

This is the first step:

“The Supplier selects a Certification Body from the approved list and provides them with information to issue a cost quotation, audit timetable and duration for a 3-year certification audit. This reflects the supplier’s audit scope and the organisational and operational complexity of the specified site.”

The remaining steps of the certification process can be seen here or in the graphic on the right side, which can be expanded.

The detailed process may vary with each Registered EXCiPACT Certification Body.

Developed by excipient suppliers and users, the Scheme’s core objectives are (i) to demonstrate a safe, reliable, transparent pharmaceutical supply chain, and (ii) to reduce the audit burden, costs and resources for manufacturers, distributors and users of pharmaceutical excipients without compromising quality. The Scheme comprises the following components:

Have a look at all the pharmaceutical excipient production sites with EXCiPACT Certification here:

See the GMP-certified production site’s of our partners:

Cationic Solid SMEDDS of Efavirenz for Improved Oral Delivery: Development by Central Composite Design, In Vitro and In Vivo Evaluation

Prev Next 1 of 2,099
Top Pharma-Excipient Links