Three-dimensional (3D) printing is a powerful technology that has wide-ranging applications, including many in the pharmaceutical industry. Among the approaches that are being explored in the production of pharmaceutical dosage forms powder-based systems which utilize either drop-on-powder or selective laser sintering and liquid-based systems which use dropon- drop deposition or stereolithography are frequently applied. With liquid-based technology, either UV, laser energy or high temperature is used to induce polymerization and build the 3D structure.1 The process of 3D printing offers the potential to produce medications tailored to the needs of patients and dosage forms in various shapes, sizes and textures with different release profiles that can be difficult to produce using conventional techniques.2

In this white paper, the use of 3D printing to overcome challenges during formulation development is explored, with a focus on enhancement of bioavailability of active pharmaceutical ingredients (APIs) in solid dispersions. It is estimated that 60–70% of drug substances currently in clinical pipelines are categorized as Class II in the Biopharmaceuticals Classification System (BCS) which indicates low solubility.3 For an oral formulation, the proper API solubility is critical for absorption in the gastrointestinal tract. If solubility issues cannot be overcome during formulation development, an otherwise promising therapeutic candidate may have to be abandoned.

The creation of amorphous solid dispersions processes, a well-established strategy for formulating APIs by embedding them in some type of excipient, has evolved over the years from the use of crystalline carriers such as urea, to polymers for hot melt extrusion (HME) and polyvinyl alcohol (PVA) to enhance and prolong the supersaturated state of low soluble compounds. To form a solid dispersion using HME, the API is molecularly dispersed in a polymer matrix using elevated thermal energy and mechanical forces applied by extruder screws (Figure 1). This process is capable of producing drug-loaded polymer filaments which can be used for various downstream applications.

Various polymers can be used in HME processes including cellulose derivatives, polyacrylates, polymethacrylates, polyethylene glycols and polyvinyl pyrrolidone (PVP). Recently, polyvinyl alcohol (PVA) has been highlighted as a

polymer particularly well-suited for HME.4,5,6 It is a synthetic polymer produced by the polymerization of vinyl acetate and partial hydrolysis of the resulting esterified polymer. Novel polymer screening tools are now available that overcome the disadvantage of conventional HME screening by using a minimum quantity of API.7 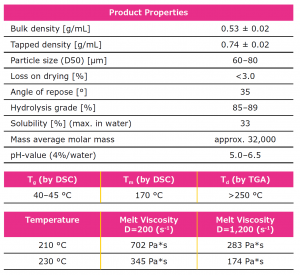 PVA-based Parteck® MXP excipient is specifically developed for use in HME; the optimized particle properties provide a constant and precise dosing of material resulting in a stable process (Figure 2). The flowability of Parteck® MXP excipient is optimized to ensure homogenous feeding of the polymer in the hot-melt extruder. Particle size and the angle of repose are also important criteria; both are optimized to ensure good flowability. The melting temperature is approximately 170 °C due to the strong alignment of polymer chains while the high degradation temperature means that the polymer can withstand temperatures of more than 250 °C.

Figure 2 shows the viscosity plotted against the shear rate with viscosity decreasing with an increasing shear rate. This is essential when it comes to processing of the material through very small nozzles; the viscosity will decrease with higher shear impact which will enable an efficient downstream process.

A typical HME process is shown in Figure 3. The speed of the conveyer belt is used to determine the diameter of the filament which can be wound or used as individual strands; commercial diameters are typically 1.75 or 2.85 millimeters.

To evaluate and optimize the process of filament production, optical laser scanning technology was added as an online in-process control to continuously monitor the filament geometry and improve homogeneity of the filaments which is essential to assure an exact dosing of the final medicine. This process analytical technology (PAT) allowed three axes to be measured simultaneously and can be integrated into the manufacturing process. Figure 4A shows the in-process control of placebo filaments, plotted as diameter versus time, containing only with Parteck® MXP excipient with a melt pump accessory that manages uniformity of filament diameter; 4B shows the fluctuations when the melt pump was not used. Fluctuations in diameter were drastically reduced with use of the melt pump indicating that the homogeneity of the process could increase.

To evaluate and optimize the process of filament production, optical laser scanning technology was added as an online in-process control to continuously monitor the filament geometry and improve homogeneity of the filaments which is essential to assure an exact dosing of the final medicine. This process analytical technology (PAT) allowed three axes to be measured simultaneously and can be integrated into the manufacturing process.

New Glatt webinar: The impact of coronavirus on comparator sourcing in clinical…

New Glatt webinar: The impact of coronavirus on comparator sourcing in clinical trials

Prev Next 1 of 1,675
Top Pharma-Excipient Links