RetaLac® by MEGGLE is a co-processed excipient comprising of equal parts of milled alpha-lactose monohydrate and hypromellose (USP substitution type 2208) with a nominal viscosity of 4000 cps. A specialized spray-agglomeration process generates textured, highly structured particles with d50 in the range of many directly-compressible excipients, 100 µm to 200 µm, typically 125 µm.

Modified release applications continue to be a development strategy for the global pharmaceutical industry. Products nearing patent expiration are candidates for product life-cycle management using this approach; however, other benefits such as improved efficacy through more structured active pharmaceutical ingredient (API) release profiles, cost effective product manufacture, and improved patient compliance exist. With various options available for API modified release delivery, hypromellose (hydroxypropyl methylcellulose or HPMC) has historically been the excipient of choice to form hydrophilic matrices [1]. The basic structure of the commonly known methyl and hydroxypropyl mixed ether of cellulose is illustrated in figure 1.

In the hypromellose chemical structure diagram (shown below), the substituent “R” may represent a hydrogen atom, or the methoxy or hydroxypropyl functional groups, which when substituted onto the cellulose backbone, form the hypromellose structure. The degree of substitution as well as the molecular weight affect the physiochemical properties.

Hypromellose grade 2208, with a nominal viscosity of roughly 4000 mPa·s (2 % solution, 20 °C), may be regarded as a very frequently used grade in modified release formulation development and manufacture.

While a binary composition, RetaLac® is monoparticulate in structure, having hypromellose and lactose in each particle. It is characterized by superior functional performance such as improved flow and blendability. Additionally, due to its monoparticulate structure, RetaLac® possesses both plastic and brittle fracture deformation characteristics, enhancing compactability in DC compared to traditional wet granulated and physical admixtures of the parent ingredients.

API release is controlled predominately by diffusion through the hydrophilic matrix, and is most robust in the range of pH 1.0 to 7.4. To minimize development time, API dissolution prediction as a function of tablet geometry is possible. This is aided by RetaLac®’s dramatic improvement in wettability compared to HPMC alone or in traditional wet granulations and simple admixtures.

Due to the hypromellose content, RetaLac® shows a tendency to absorb moisture at elevated relative humidity, as shown by dynamic vapor sorption (figure 3). Interrestingly, the equivalent physical admixture maintains a largely similar behaviour to RetaLac® (not shown). 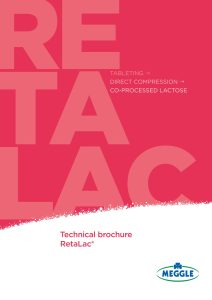 Company: MEGGLE is one of the world´s leading manufacturers of pharmaceutical grade lactose and co-processed excipients with expertise of more than 70 years. We encounter lactose in so many areas of our life – reason enough to take a closer look at this multi-functional “white powder”.

Do you need more information or a sample of RetaLac® excipients?