We have kept reporting on the latest TiO2 developments, from the 2019 ban in France, over the 2021 EFSA decision in food and feed, to our FAQ on TiO2.

To properly address this important topic, we decided to host a panel discussion on Titanium Dioxide at ExciPerience 2022. The experts Dr. Mahmud Yunis, Dave Schoneker, Dr. David Lockley and Dr. Jason Teckoe joined their host Philippe Tschopp to talk about the future use of E171.

In addition to the panel discussion, Dave Schoneker held his speech on TiO2: “Potential Global Regulatory Impact of the EU E171 Ban on Dietary Supplements and Pharmaceuticals”

Watch the first 4 minutes here and read the transcript or watch his full speech on Titanium Dioxide directly below the transcript to enhance your knowledge!

Dave Schoneker: All right. Well, I’m glad. Glad to be here today and be part of this group of experts. And we have a lot to talk about with TiO2 related to the global impact of the the EU E171 ban on dietary supplements and what impact that could have on pharmaceuticals. So before I get into the presentation itself. I would like to just do a quick poll here to get a feel for where you’re coming from. And Philippe, I believe you’ll pull up that poll and you can tell us the results. So the question here and again, this kind of sets up all three of our talks here somewhat is: What is your understanding of the actual safety of E171 that is used in foods and pharmaceuticals as a pigment and an opacifier. So yeah, the options here I’ve heard a lot in the media about EFSA opinion, saying that they can no longer say E171 is safe. And so I have concerns about the safety of E171. You might say I’m skeptical of the EFSA opinion due to the use of the precautionary principle without actually demonstrating a real safety issue. Or you might say, I’m confident that there is no real safety concern with the use of E171 in foods, pharmaceutical applications based on credible science. Or you don’t have enough information to decide if it’s safe at this point. Or you fit into a different category. So let’s just take a second for you to vote. And Philippe, can you bring up the answers or, you know, say the answers? Because I can’t actually see them on screen.

Philippe Tschopp: You cannot see them, Dave. I have the answers on the screen. Everybody can see them. Yeah, 42%. I’m skeptical of the FCA opinion. So that’s the biggest one now coming in some others. So we are at 44. I’m skeptical. 21. I’ve heard a lot in the media and then I’m confident is only 7%.

Dave Schoneker: Okay. Okay. Well, that’s kind of about where I thought it would probably break out. Especially given the audience that I think. We have here for the for the conference. So we’ll try to. Answer some of the questions that you might have here, either during the presentations or during the panel discussion. So let me just summarize very quickly. It’s get everybody on the same page and that is you know, the European Commission announced the ban officially on January 14th. This has been discussed actually. for a number of years. We kind of knew what was what was happening, but the actual official ban happened on January 14th. And unfortunately, regardless of the lack of any true indication of a safety concern, the Commission in Parliament has now banned the use in food products using the precautionary principle. Now David’s going to talk a lot more about some of the specifics behind this and some of the concerns about this opinion, the EFSA opinion. But the bottom line is, you know, this has happened and the removal of TiO2 as an approved food additive entered into force on February 7th. There was a six month transition period which ends in August and then after August, food products containing TiO2 will no longer be able to be placed on the EU market. However, foods already on the market will be able to stay in the market until they reach their use date. So food supplements will be impacted immediately by this ban. However, when we get into talking about pharma and cosmetic impact, this is somewhat uncertain at this time.

To watch the complete speech, please fill out the form below: 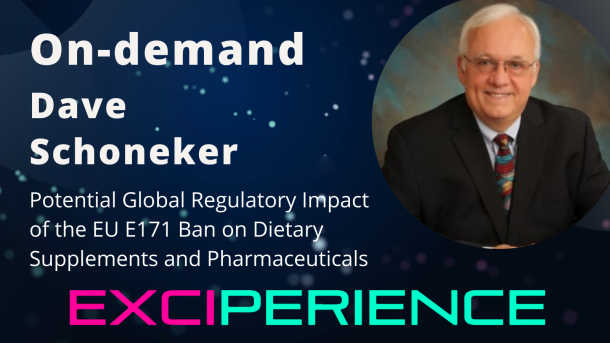 Please enter your information below.

Prev Next 1 of 1,918
Top Pharma-Excipient Links